Looking for that cocktail that features rare ingredients, expensive spirits, and provide the ultimate luxury experience? Look no further to our 5 favorite overindulgent on the spirits menus around the world: The Ritz-Carlton Tokyo’s Diamonds Are Forever Martini holds the title as the most expensive cocktail at 2,000,000 Yen  (nearly $19k USD). The decadent drink is made with chilled Absolut Elyx vodka, a hint of fresh lime juice, stirred or shaken, and sparkling with a one-carat diamond at the bottom of the glass. Note: this cocktail also comes with a live band serenading “Diamond Are Forever” to the lucky guests. A Guinness Book of World Record was set on February 7, 2013, by Joel Heffernan at Club 23 in Melbourne (owned by Australian cricketer, Shane Warnefor) the most expensive cocktail with his Winston (after Winston Churchill) cocktail. Made with two $6,000 shots of 1858 Croizet Cognac, $800 Grand Marnier Quintessence, and super-rare Chartreuse V.E.P, this is one cocktail with opulence. Unfortunately, as of this writing, the bar is permanently closed. Circa 2016/2017 in NYC, Andy Goetz owned a bar called Uncork in the Upper East Side. Not just throwing a precious jewel into your expensive drink, Andy custom-made every engagement ring in the Diamond is Forever Martini. This ring-making was a process, requiring three days of advanced ordering as well as an appointment with a specialist jeweler. Unfortunately, the diamond-in-the-martini business wasn’t that lucrative in NYC and Uncorked is no longer in business.

The Algonquin Hotel is one of the most historic haunts in New York City, and up until 2019, they feature a Martini on the Rock- repeating the same procedures of other diamond-infused drinks of a 3-day advanced reservation and an appointment with the in-house jewelry maker. The Algonquin was the perfect place for a special engagement or anniversary.  The cocktail launched in 2005 after a $3 million renovation and was created by Carla Caccavale from the Quinn Agency and General Manager Anthony Melchiorri as a way to attract attention for the re-opening. 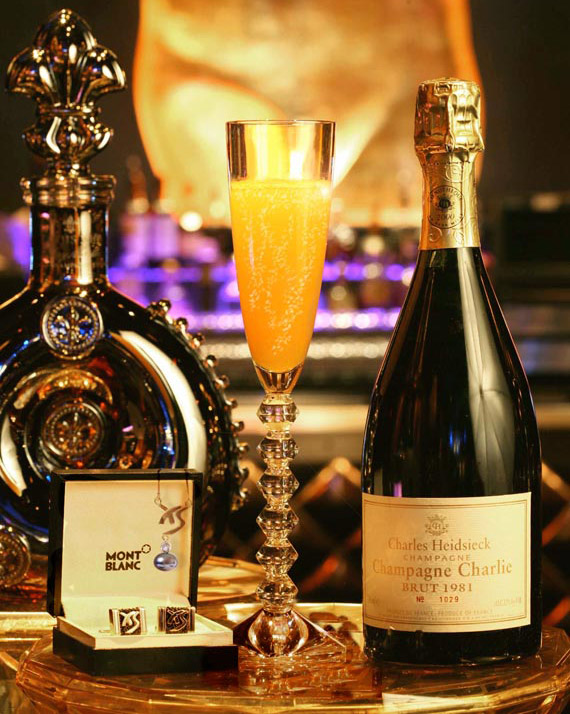 Las Vegas is known for its glitz and glamour and The Ono Champagne cocktail at The Encore Wynn Hotel is no exception. Made with the rare 1981 Charles  Heidsieck champagne, $90,000 Louis XIII Black Pearl cognac mixed with fresh orange juice, apricot juice, rose nectar. The decadent drink doesn’t stop there, the cocktail comes in a jewel-encrusted glass with an 18-carat gold necklace as a gift.

Some honorable mentions for Most Expensive cocktails in the world include the Ménage a Trois for $3,000 at Tryst Nightclub in the Wynn Hotel and the $3,000 Sapphire Martini at Foxwoods Resort Casino in Connecticut
Tags
Diamond Is Forever Martiniengagement ringfine jewelryLas VegasLouis XIII Black PearlLuxuryMartini on the RockNew York CitySapphire MartiniThe Algonquin HotelThe Encore Wynn HotelThe Ono Champagne CocktailTop 5uncorked