With new ownership and recent renovations, a number of San Francisco’s most iconic hotels remain the best places to stay

While San Francisco may becoming to expensive to live in, it is still relatively affordable to visit. And unlike New York City’s hotel scene which seems to grow and grow, with trendy newcomers stealing the show, many of San Francisco’s top places to stay are the same properties they have always been—despite minor name changes.

The following list is not ranked in any particular order nor does it represent the most expensive hotels—though most are on the pricer side. Our criteria included price, neighborhood, proximity to quality restaurants and attractions and overall allure.

A relative newcomer (opened in 2005), The St. Regis San Francisco is located in the vibrant SoMA district affording guests magnificent views of the San Francisco cityscape. Rooms feature stylish contemporary decor in creams and dark woods, with standard features such as flat-screen TVs, crisp Pratesi linens and deep bathtubs. The hotel is home to Remède Spa San Francisco, a Forbes Travel Guide ranked four-star spa in San Francisco. The hotel is also home to the Japanese inspired Ame restaurant which features a sophisticated offering of limited edition sakes and a 300-bottle list of handcrafted wines from around the world. 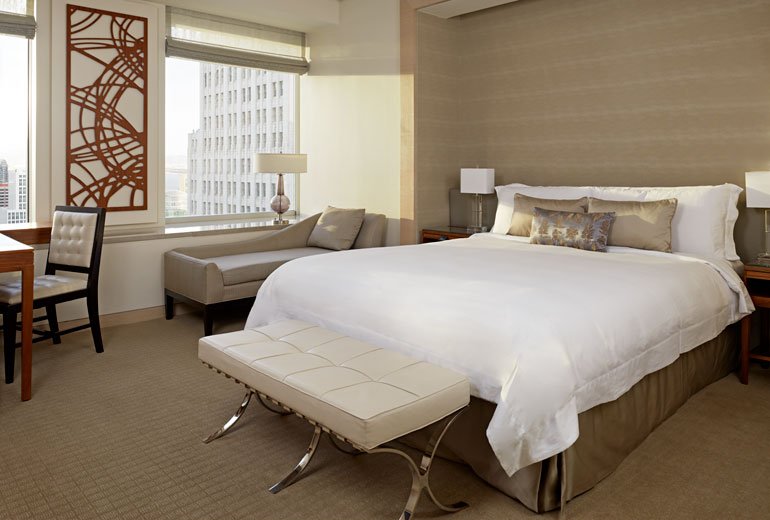 An institution atop Nob Hill, this luxury San Francisco hotel has been host to some of the most influential meetings and events, breathtaking weddings and personalized special occasions of the century. Each of the hotel’s spacious guest rooms and suites have been elegantly updated including flat screen TVs, luxury linen ensembles and pillow top beds. In addition to its 591 guest rooms and suites the hotel offers several dining choices including the Tonga Room & Hurricane Bar offering exotic Asian cuisine, along with the city’s best Mai Tai. The hotel offers panoramic views of the City and the Bay from high atop Nob Hill and it’s central location is a short cable car trip from the bustling Downtown, Financial District, Union Square and Fisherman’s Wharf.

Also perched atop Nob Hill (across the street from the Fairmont) lies the Scarlet Huntington, which opened in 1924. While some of the old school charm has been compromised by the new ownership and mixture of Asian influence, traditionalists will be pleased to see the hotel’s signature red brick façade, illuminated sign, and period character have been preserved, not to mention it’s other assets—The Big 4 Restaurant and The Nob Hill Spa. Staying at the Huntington (excuse me…The Scarlet Huntington) feels like you’re in the San Francisco of old but with modern amenities and a little more flare. Positioned on the top 11 floors of a 48-story tower, The Regency in San Francisco offers breathtaking views over San Francisco Bay—along with a timeless design and modern amenities. The hotel’s central location in the Financial District places you at the heart of San Francisco, with the city’s major attractions, including Fisherman’s Wharf, Union Square and the Ferry Building, all within easy reach. Brasserie S&P, their on-site restaurant, serves fresh California fare, along with fine wine and carefully crafted cocktails. Amenities include a 24-hour fitness center and a spa with three treatment rooms, one couples’ suite, and a relaxation lounge. The quintessential landmark San Francisco boutique hotel on Union Square, Campton Place is now a part of the Taj family of hotels. For over 100 years Campton Place has been a sanctuary for discerning travelers from around the world earning “Best Hotel in the United States” in 2010 by the Global Traveler GT Tested Awards and a Michelin Star for Campton Place Restaurant. This downtown (Nob Hill) San Francisco hotel attracts guests with a sophisticated urban retreat presenting 336 recently reimagined guest rooms and suites featuring an alluring color palette of steely blue, grey and silver. According to HBA principal designer Kathleen Dauber, the new guestroom design was inspired by San Francisco’s Wilkes Bashford — one of the city’s iconic luxury department stores – and the legacy of former Mayor Willie Brown, known for his suits.The Ritz-Carlton, San Francisco also features contemporary Californian dining in Parallel 37, as well as a cable car stop just outside that is ready to whisk visitors to the city’s most treasured sites. Guests will experience distinguished luxury at this timelessly elegant Nob Hill hotel, which was just awarded the 2015 AAA Five Diamond award for the 21st consecutive year. What the hotels that sit atop Nob Hill (Fairmont, Scarlet Huntington and Ritz) have in great views, the Omni has in location. Situated in the heart of the financial district, guests have only a short walk to Union Square, Jackson Square, The Ferry Building on the Embarcadero and many of the best restaurants in San Francisco. Guests will appreciate modern amenities in a boutique ambiance due to its Florentine Renaissance architecture. Built as a bank in 1926, the lobby is adorned with Italian marble, rich fabrics and Austrian crystal chandeliers. And Bob’s Steak & Chop House, located off the lobby on the ground floor, has carved out a reputation as one of the best steak houses in town. The Best Hotels In San Francisco was originally featured on GoodLife Report. Reprinted with permission.

These Are The Top 5 Places To Sleep Under The Stars