The Best U.S. Airport Terminals To Be Stuck At

Delays at airports are not what they used to be. That is, if you are lucky enough to be stranded in a choice terminal replete with the type of trendy dining and watering-hole options that rival our very cities. If you find yourself in an airport for an extended period of time during the holidays—or any day for that matter—hopefully it’s at one of these terminals.

Hartsfield–Jackson Atlanta International is the world’s busiest airport. If that doesn’t make you want to have a drink, I don’t know what will. Luckily this airport is home to One Flew South, one of the best-reviewed airport bars in the United States—if not the best. Get away from the crowd and enjoy something from their large cocktail menu or international wine list. The menu can be expensive but by airport standards the food is rather sophisticated. On the bar’s list of fare, you’ll find such items as a Kobe burger with black truffle mayo and a pulled duck confit sandwich with a fig and peanut sauce. The restaurant also features a full sushi bar. According to Chicago Eater, Publican Tavern, in O’Hare’s Terminal 3, “is a certified hit, porting over the Fulton Market favorite to O’Hare travelers.” With a focus on seasonality and quality sourcing, Publican Tavern’s approachable menu offers an array of sandwiches and salads, as well as a thoughtful selection of craft beer and wine. However, travelers with a little more time on their hands can savor dishes such as spicy pork rinds; avocado salad; pork shoulder chop; organic baked salmon; and the “hot” Doug Sohn made with Chicago-based Hot Dougs bratwurst, bourbon mustard, fried shallot, and Emmental cheese. For morning travelers, Publican Tavern offers breakfast delights such as a waffle with honey butter and strawberry jam; a hot smoked salmon with lemon ricotta, baby romaine, celery, and butter pickle dressing and multigrain bread; and the Publican Breakfast consisting of fried eggs, toast, breakfast potatoes, and bacon or sausage.

While Publican may be the new kid on the block in terminal 3, amazingly they may not even be the best as T3 is also home to Tortas Frontera—named best airport restaurant in America by Conde Nast Traveler AND Bon Appetite back in 2013. Celebrity Chef Rick Bayless offers mouth watering selections that would garner attention anywhere, let alone an airport, such as the Pepito (beer braised short ribs), Chipotle Chicken and Smokey Garlic Shrimp. Drink a wide variety of beers from Colorado-based brewer New Belgium at DIA’s New Belgium Hub Bar & Grill. Beer selections include their classic Fat Tire Amber Ale, Ranger IPA and Snapshot Wheat, while the food menu is centered around an inventive lineup of sandwiches and platters including their classic Bratwurst, Fried Chicken and Waffles and a Chicken French Dip Sandwich. It can be a bit of a trek to get there, though, (Near Gate 80 of) so plan carefully to avoid finishing your beer while your flight is finishing boarding. New York City’s 3 major airports (JFK, Laguardia and Newark) may be the butt of many travel writers’ jokes—and deservedly—but JFK’s terminal 4 is certainly bucking that trend. Having seen several expansions and renovations in the 2000’s and 2010’s, T4 completed it’s biggest project yet in May 2013 with the culmination of the first phase of Delta’s $1.4 billion project. Servicing all international, transcontinental, and many partner airline flights, Terminal 4 at JFK is now the only non-airline, privately owned terminal in the U.S. Nearly one out of every three passengers going through JFK goes through Terminal 4. Given its size, it’s only natural that there should be plenty of dining options—and there are. Once past security, travelers can enjoy eats from big names in NYC dining like Danny Meyer’s Shake Shack and Blue Smoke and Marcus Samuelsson’s Uptown Brasserie, before boarding their flight. And it only gets better for travelers with lounge access: The new flagship Delta Sky Club has a modern design, complimentary booze, a Ciroc Vodka-sponsored VIP room, and a one-of-its-kind, outdoor Sky Deck, where you can order cocktails and watch the planes take off and land.

Jet Blue’s Terminal 5 is another breath of fresh air for NYC airport terminals. It’s also home to Deep Blue Sushi, one of the best airport sushi bars around. If you can’t overcome your fear of airport sushi, relax in the cool environment and enjoy a drink from their Asian-inspired cocktail list.

Not a fan of raw fish altogether? The highly acclaimed La Vie, from former Minetta Tavern chefs Riad Nasr and Lee Hanson serves French country classics, while Piquillo, created by Txikito’s Alex Raij, is the first-ever Spanish tapas restaurant in a US airport. 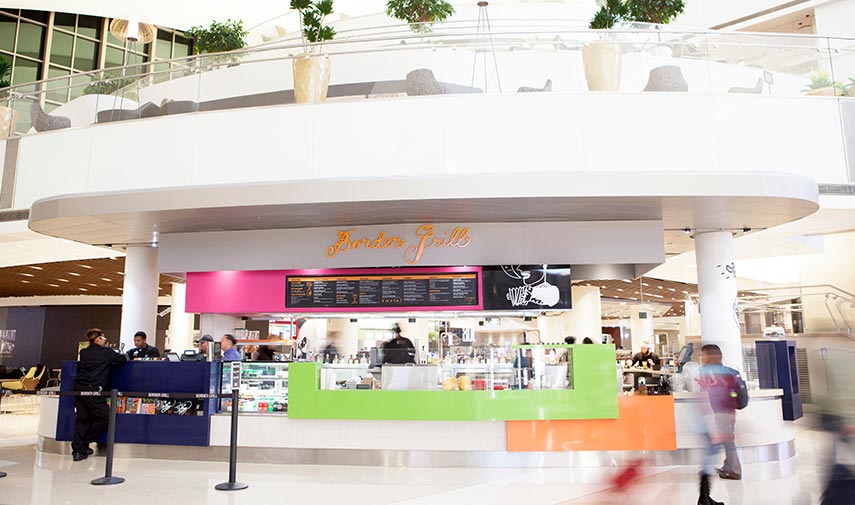 Tom Bradley International Terminal (TBIT), which opened in 2013, is the busiest terminal in California, so needless to say it has plenty of dining and retail options. In fact, the dining and retail segments of the terminal were overseen by retail space behemoth Westfield and feature 31 new restaurants including 17 local LA brands. There’s also a new $25-million duty free retail outlet and 36 new stores – including names like Bulgari, Fred Segal, Kitson and Michael Kors – 9 of which are making their airport debut here.

At the top of the dining list has to be Border Grill, which is an LA institution. Enjoy the popular smoked chicken salad or Border classics such as the tortilla soup, Peruvian ceviche, Yucatan pork and grilled skirt steak.

Looking for something lighter? Grab some sushi as French-Japanese mini-chain, Chaya Sushi. While you won’t find a huge selection, the menu’s concentration on nigiri sushi, specialty rolls and salads is a perfect mix for airport fare. There’s a full bar too.

Short on time? Grab some mouth water Southern fried chicken from ink.sack to go. Their signature black bags are perfect for taking on board. Terminal 2 is home to Napa Farms Market, a gourmet deli and bakery selling various prepared foods, cheeses, deserts and such from Bay Area purveyors like Acme Bread and Cowgirl Creamery. Customers can also find larger brand name products like Tyler Florence’s rotisserie chicken, desserts and sauces from Yigit Pura’s Tout Sweet Patisserie, and pizzas. Take your food with you or enjoy right in the market where there is plenty of seating.

The Overhead Compartment with Erin Heatherton

Inside The Ritz-Carlton, Amelia Island, Florida