How a Luxury Catamaran Can Improve Your Sense of Adventure 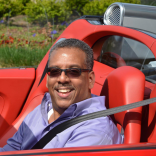 So what’s behind the title of this review? Honestly, after driving the stellar 2021 Lexus LC 500 convertible, I thought about Formula 1 teams Williams and Racing Point. They utilize their own chassis, but use Mercedes-Benz built engines. McLaren is even planning a switch to the coveted powerplants for the 2021 racing season. There’s a good reason for this, as the Mercedes-PETRONAS racing team has dominated the sport for many years now. With a powerful 5.0-liter, 32-valve V8 motor outputting 471 horsepower and 398 pound-feet of torque, the performance and the sound of the engine in the 2021 Lexus LC 500 Convertible made me think of the AMG naturally aspirated engines that used to motivate some of the world’s best sports cars. In fact, my personal 2009 SL63 AMG has a 600 plus horsepower naturally aspirated engine. Present day AMG models all use turbocharged engine variants.

Given the incredible levels of performance the LC 500 showed during my test loan, I was convinced that maybe the good folks at Lexus gave Mercedes a call and asked them to supply a superb engine for this all new convertible, and before the convertible, the LC 500 Coupe that’s been on sale for a couple of years now, much like Williams and Racing Point. Well, Lexus did not call Mercedes, because they didn’t have to. In case you haven’t paid attention, Lexus’ history of building super reliable and boring to drive sedans and coupes is over, with an Honorable Mention to the 1990’s era SC400 with its potent V8. Even though the SC was quick, it didn’t evoke levels of performance or handling to compare to any sports car, let alone an AMG. But Lexus had a plan. It all started with the 2010-12 LFA, a $400,000 supercar that showed what the brand was capable of building. Then came the competent but not quite ready for prime time RC series that debuted in 2015. Initially, they were fun to drive cars that lacked serious propulsion. But also in 2015 they unleashed the RC F, which upped the performance quotient. And in 2019 the RC F Track Edition debuted and the enthusiast world took notice. The RC F Track Edition is a monster in its own right, with the same 5.0-liter natural breather now in the LC series that outputs 472 horsepower and can reach 60 mph from a standstill in 3.96 seconds. At just $96,800 before any options and destination charges, the RC F Track Edition is a street and track rumbler with an outstanding power-to-weight ratio.

The point of all of this is Lexus didn’t need a Formula 1 formula – they developed their own super motors in-house, and the results mean when shopping for luxury and performance, Lexus can compete with Mercedes, BMW and Audi (and Tesla for electric car devotees).

And the 2021 LC500 convertible can not only go fast, it can handle all the twisties you can throw at it. Chopping the roof off of a vehicle can be a disaster if the remaining structure is not properly reinforced, as the roof is a major structural element in “traditional” vehicles. I remember some of the Chrysler convertibles from the 80s and 90s that used to dance across washboard surfaces due to their poor design and lack of rigidity. Not so with the LC, which exhibited no “cowl shake” or other untoward behavior no matter how unsettled the road surface was. Many components went into stiffening the open body, including a unique and quite handsome aluminum brace that’s tucked out of sight just behind the rear seats in the compartment the top disappears into when lowered. As a result of the additional required bracing, the LC Convertible weighs in at 4,540 pounds, while the Coupe’s mass totals 4,340 pounds. Great handling and superb ride quality are the result of a double-joint multilink front and multilink rear suspension. When executed correctly, suspensions with multiple links offer superior steering and axle geometry, which translates into superior handling capabilities. An optional Torsen limited-slip rear differential and Yamaha performance damper adds to handling prowess (this feature was standard on my test Inspiration Series trim). Inside, the LC 500 is all Lexus, which means the quality is first rate and the luxury accoutrements many. I tested the $119,800 LC Inspiration Series, of which only 100 will be built.

From the “Ripley’s Believe it or Not” department, part of the “inspiration” for the Inspiration Series came from the Morpho Butterfly. The exclusive “Structural Blue” paint was inspired by the properties of the Morpho’s wings. The exclusive color is not produced by dyes or pigments but the play of light on its surface. Meticulously crafted, it requires 12 separate steps to paint the LC, and took more than eight months of development to create. The result is a color Lexus claims is 50 percent more vibrant than conventional paints. Based on my “eye meter,” I would say they’re correct. Included features with the Inspiration Series includes the special paint, bespoke Amalfi White semi-aniline leather-trimmed front seats with embossed headrests, 21” forged wheels, Mark Levinson 13-speaker, 915-watt audio system, heated steering wheel, “Climate Concierge” with upper body heating for top-down days in cooler weather via a neck level vent on the front seats, SmartAccess card key, windshield wiper de-icer, and a special two-piece Zero Halliburton travel case set.

While not specially built or fitted for the LC Convertible, the cases remind me of the fitted leather luggage available on Mercedes-Benz 300SL Convertible and Gullwing Coupes from the late 1950s and early 1960s. Nice touch.

The view from behind the leather clad steering wheel includes data fed to the head-up display. An eight-inch multi–information LCD display details audio, navigation, apps and system menus. To the right of the display is a redundant but nice analog clock, and to the right of the clock is an interesting dash material that looks like carbon fiber and is very nicely done. The blue and white Almalfi treatment is exceptionally good looking. Striations embossed in the leather door panels bring to mind the gentle winds off of Italy’s Almalfi Coast. My only beef with the interior and the car as a whole is the track pad Lexus continues to use to select items on the central telematics/control display. The screen is not touch compatible, so you must take your eyes off the road for a longer time to swipe along the touchscreen to accomplish any feat. I find the system maddening. I like the metal audio volume knob but dislike the fact that every time I would lay my long arm across the console, it would hit the knob and mute the audio system. Speaking of metal, the LC is outfitted with satin aluminum trim and paddle shifters that look awesome. What You Need To Know Before Tuning Your Car

From the Favorite Features Department, the virtual gauge cluster has a mechanical feature that is super. Press a button on the steering wheel, and the cluster which features a central tachometer with digital speed readout, and is flanked by digital gauges for outside temperature, oil temperature, fuel level, and odometer slides smoothly to the right so you can access data and settings via the multi-function trip computer. All of the above listed data streams are simply repositioned while you can get even more info from the computer. It’s very trick and totally cool. The Lexus packaging crew should be proud. The gauge cluster housing also features two knobs, one protruding from each side of the housing, including a drive mode selector. “Sport Plus” is the setting of choice for max performance. The other knob controls snow and electronic stability modes. Yes, I said snow mode.

My evaluation of LC 500 Convertible can really be summed up with one word – sound, or the lack of it.

With the top down, the sounds emanating from the sweet V8 include rev-matching downshifts replete with requisite pops and gurgles from the stainless steel performance exhaust system. With the fully lined top up, the quiet nature of the beast is exposed. Play your favorite tune on the premium sound system, and nothing competes with the clarity and presence Mark Levinson audio brings to the car. 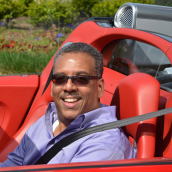